A drain tends to get clogged when debris blocks the path for water and other waste. Any drain opener solution can be used to dissolve the debris and remove the clog. There are different kinds of drain opener solutions. They are basically divided into two types based on the pH of the main ingredient in the solution. Both acids and alkali elements can be used for opening a drain.

What Is an Alkali?

Any element with pH greater than 7 is called an alkaline or alkali element.  These are often referred to as “basic” or “base” elements.  Below are some common alkalis and their pH levels.

There are numerous types of alkali compounds that are used for drain opening.  We discuss these ingredients below. 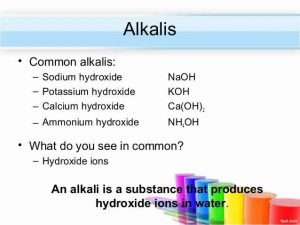 Alkali drain openers can be broadly classified into two types.

In some brands of strong alkali drain opener, you may find potassium hydroxide (KOH) as the main ingredient.  But sodium hydroxide is the most common one for unclogging drains.

Why is Sodium Hydroxide So Common?

There are stronger alkali substances in the periodic table, so why is sodium hydroxide used in most of drain openers?  It is a cheaper alkali than most others but that cannot be the only reason for its popularity. Below is the list of advantages of using sodium hydroxide in a drain opener:

Some brands of alkali drain opener include sodium hypochlorite, commonly known as bleach.

There are numerous weak alkalis that you can find at home like ammonium hydroxide, potassium permanganate and others. Yet, sodium bicarbonate (baking soda) is the most commonly used one. It has the following properties:

The most common weak alkali drain opener solution is baking soda with vinegar. Vinegar is a weak acid and baking soda (sodium bicarbonate NaHCO3) is the alkali.

How to Use Baking Soda With Vinegar?

To create your own weak alkaline drain opener solution, throw a cup of baking soda into the drain and add quarter cup of any vinegar (any brand or type of vinegar would do well). Add a liter of boiling water after five minutes.

Read more:  How to Unclog a Drain With Baking Soda and Vinegar

This article talks in detail about alkali used in liquid drain openers. The common alkali substances mentioned in this article are sodium hydroxide, sodium bicarbonate and potassium hydroxide. This is not an exclusive list. There are numerous brands of drain openers around the world. Each brand uses different chemical components with varying strength. There can be other alkalis used for unclogging drains. This article just pinpointed the most common ones.